A very fast Collider-based AI Navigation system written in C# for Unity3D for both small maps and open worlds. 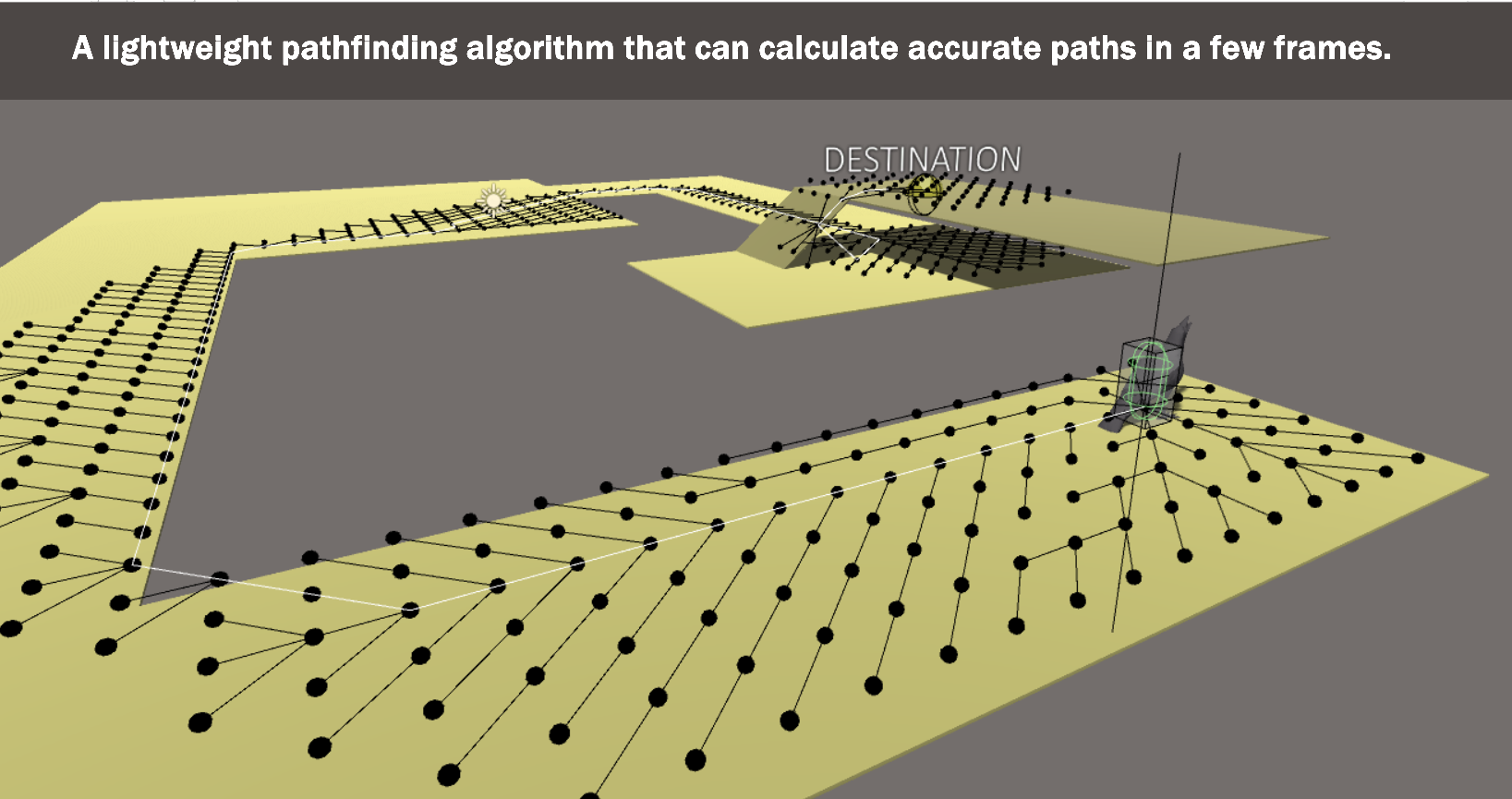 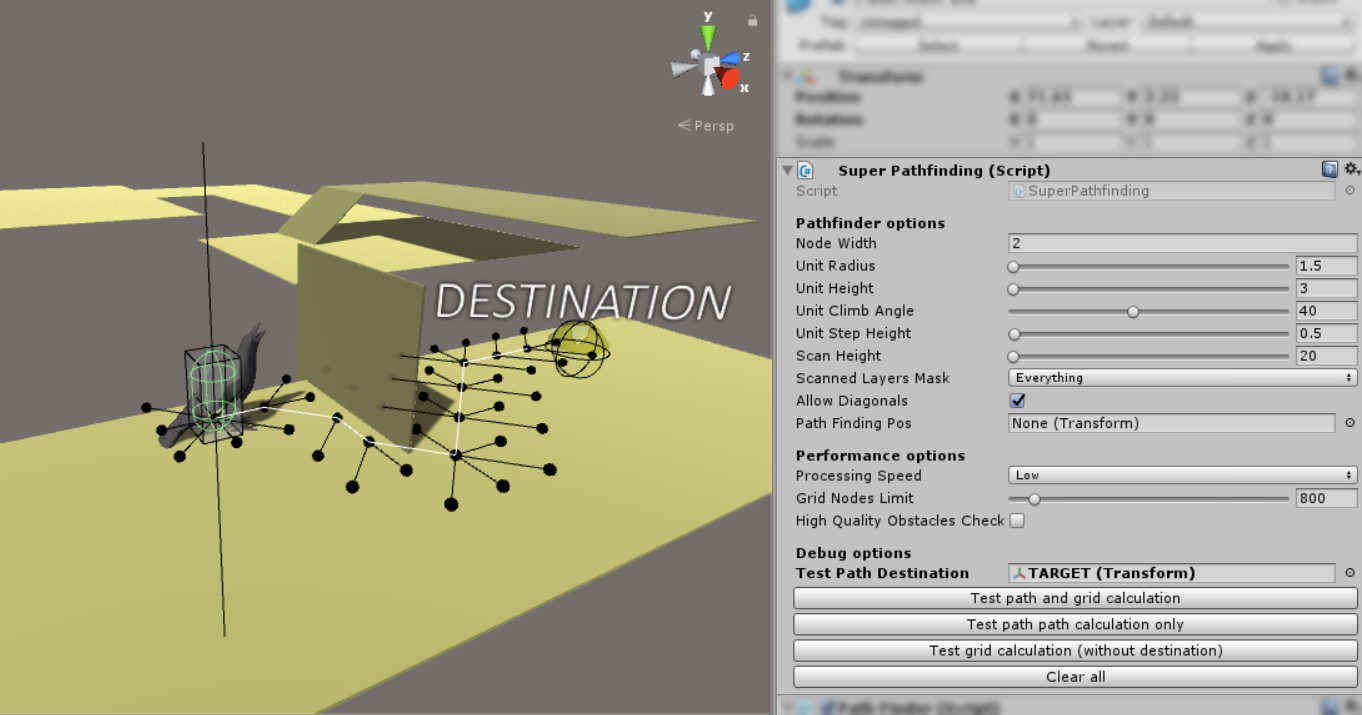 Super Pathfinding System is an extremely lightweight tools that can calculate paths between two positions, in almost any possible 3D scenario with just a few lines of code.
You can use paths for many different purposes, like moving characters, animals and vehicles in different environments, from houses with a lot of rooms, to large open world maps.
Script works using Physics Raycasts and colliders detection to explore the world and find the best path.
There is basically no limitation about what this pathfinding system can do, it's only a matter of configuration. Code is well documented, commented and easy to read. All code can be edited but cannot be shared neither for free or for commercial purposes without any consent from Corvostudio.

Package also contains more useful stuff, like a demo scene and a working example AI that with a few lines of code can calculate and move across paths using Pathfinding System's API. However it's suggested to write your AI from scratch, or implement API into your custom AI.

To implement this system Simply add SuperPathfinding component to the unit you'd like to move.
You will able to calculate and manage path from API's like FindPath(destination) method.
After calculation is completed, generated paths (PathData) can be accessed with GetLastCalculatedPath() or assigning callbacks in FindPath() arguments.
A sample AI that also moves along paths using GoTo(position) and Stop() methods is included as example, to make this system as much plug and play as possible.

"How does this work?"

Simply add SuperPathfinding component to the unit you'd like to move and you will able to calculate and manage path from API's like FindPath(destination) method.
A sample AI that also moves along paths using GoTo(position) and Stop() methods is included as example, to make this system as much plug and play as possible.

Super Pathfinding System uses a "dynamic grid system" where a virtual non-squared grid is created in many cycles scanning and raycasting nearby environment. Once that calculated grid is connecting the start point and the destination, an A* algorithm proceed to find the best path.
Algorithm will find a path and represent it as Vector3 array of waypoints inside a PathNode object. You can manipulate found path getting node by node from start position to destination and discarding them while navigating path. An example AI is included, so set up should be quite easy.

During calculation many Raycasts will be called - once for "cycle". Every cycle scans a "grid node", so "max cycles" is equals to "max grid nodes" and "Raycasts quantity". Raycasts aren't usually expansive actions, but if called many times in a single frame can really broke performance. Super Pathfinding Algorithm allow user to decide how many cycles scripts can make in a single frame, and maximum amount of cycles during a calculation. Usually a medium-budget computer should be able to handle multiple pathfinders calculating paths up to 600 cycles with a medium processing speed giving satisfying results without any frame rate drop.
You don't need to reach target in only one calculation, but you should split travel in multiple paths when possible.


"So every calculation has a fixed amount of cycles?"

This is quite important: If the passed destination is places on a walkable collider, script should able to recognize if best path can be reached without making all selected cycles. Sometimes path can be calculated within less then 100 cycles, but this really depends on 3D world complexity and situation. If you want to make sure that destination is placed on a walkable area, there are functions to adjust destination before starting the calculation.


"How much time does this system need to calculate a path?"

You can calculate it by yourself: the formula is Needed Frames = gridNodesLimit / processingSpeed (you can see processing speed values in Scripting API session). Usually just a few frames are enough to calculate a quite good path (often even no time is needed), but increasing scan and path quality will increase needed time. I don't think there are many scenarios where this algorithm will need to have a setup that takes more then half second, but if you have some questions about your particular situation, you can always send me a mail.
Remember that you can test calculation time only during runtime (both from API and inspector's GUI), while when editor is not in runtime it will always calculate path instantly.


"How can I optimize integration?"

The Sample AI that comes with script is a good example about how to efficiently use those API's. Anyway implementation pattern can be something like:
When a destination is available, calculate a path and start moving along it. Path's shouldn't be too long if destination is very far, because you can always subdivide the trip in multiple paths. Every time path limit has been reached, or maybe also when too much time has passed, if the destination hasn't been reached yet AI should recalulcate a new path.
If you want to target low end devices but still have a lot of AI's I suggest also to call FindPath only on a limited number of AI's at the same time, maybe implementing a queue.